Last time, I left you hanging about our new floors, but first I’ll fill you in on a couple of other projects that went on before we put them down.

Mom had somewhere between 3,500 and 4,500 books in the house and most of them were in the hall by the dining room.

We boxed them and grouped them by author. We took Mom what she wanted to keep and we’ve gradually been taking some to the library. They asked us just to bring about five boxes at a time. We should be done by November 2069.

We kept her nicely bound classics and others that we liked, then moved them into a bookcase in our bedroom.

We were left with empty shelves and walls which were all orange pine. We decided to paint them, and do it BEFORE we put down new floors.

There was also a wall that was about four and a half feet tall between the dining room and the hall. (Remember? You just saw it up there ^ behind the clock on the piano??) It felt kinda awkward and really broke up the space. But simply removing it meant that we wouldn’t have a place for seating in that area and it would just be empty space. Our solution: cut the wall down shorter, just below the back of the love seat. That gave it a feeling of openness AND a place to sit that doesn’t look like it’s just sitting in the middle of the floor. 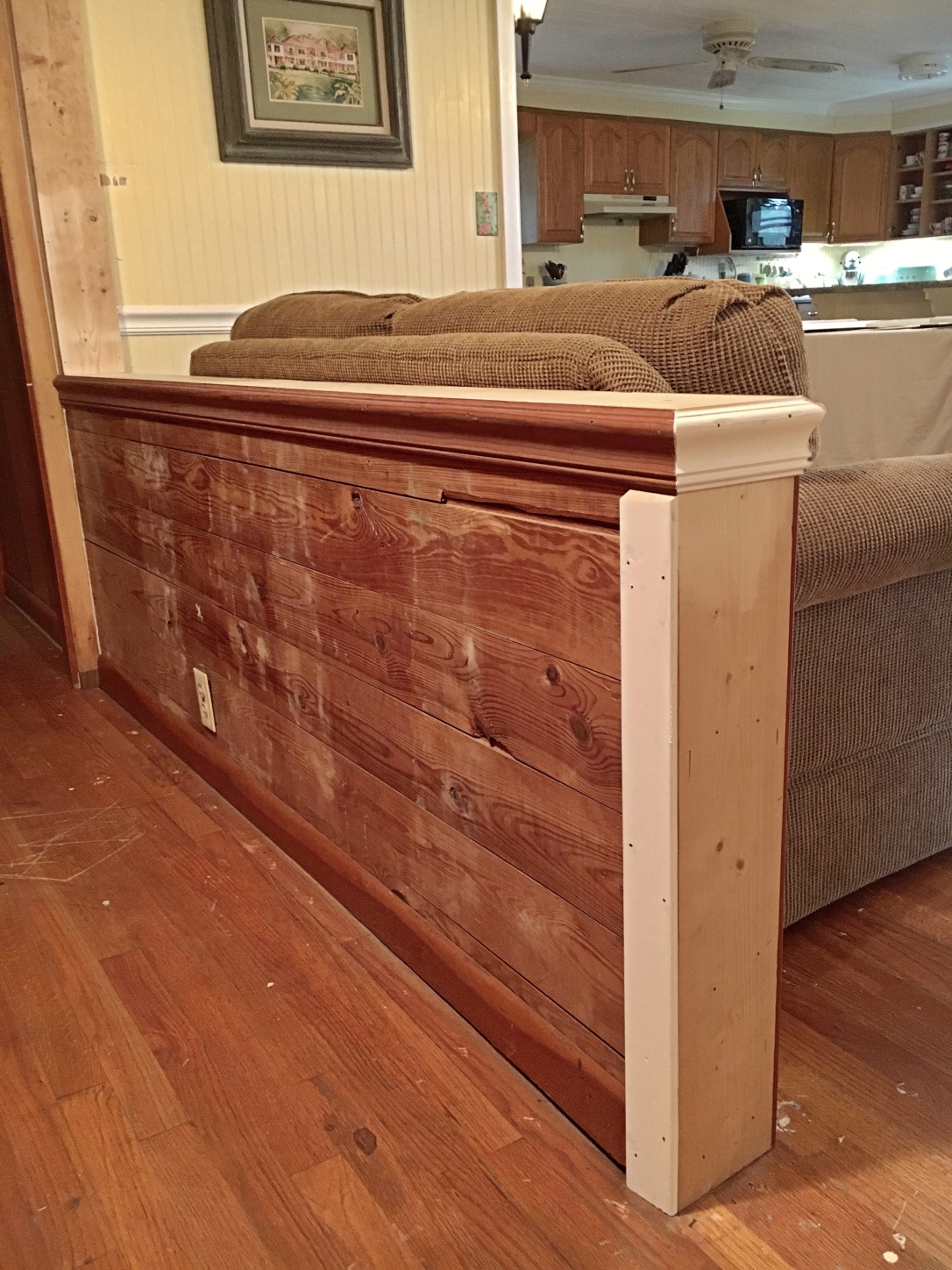 While removing the paneling on the short wall, we discovered nice shiplap boards. We decided to keep them exposed and I finished the top of the wall with some chair rail and then we painted everything white to lighten up the dark space.

After painting the shelves in the hall we loaded them down again, LOL!

Now onto the floors! We had chosen the flooring we wanted months in advance and watched it often for a sale. We did order a really nice, thick underlayment to go under it. The ones in the flooring stores are so thin and we have some really uneven and sloping floors that need extra cushion.

After a few months, and a wedding, (The reception was at our house and we had plywood floors…ugh) we were able to purchase the flooring when it was on sale.

As for the installation, I’ve worked in (and under) countless homes over the decades and one thing I’ve noticed, is that flooring always looks better when it runs diagonally to the walls. Also, it hides the walls that aren’t running, not quite straight. You know how old houses can be.

Running diagonally is more challenging and you’ll want to figure about 15% more flooring. We actually used less because I had some AMAZING helpers who helped keep me from making wrong cuts, saved my back, and made the absolute best use of our flooring which they laid out beautifully.

Rachel and fam had moved in with us and she was “encouraging” me to have the flooring down by Mariana’s first birthday party, so she jumped in to help.

We started by opening all of the flooring boxes to let them acclimate (that means to let the boards reach the same temperature and moisture content, ie humidity level as the inside climate) to the house. We left them open for about a week.

If the flooring is not acclimated before installation, the floors can buckle and it’s not pretty. (google some images… really…)

Then we installed the underlayment, cutting it to fit everywhere, leaving it about a half inch from all the walls to allow for seasonal expansion.

We taped all the seams with the adhesive strips already attached to the material. Wherever we needed, we used duct tape, mostly for small areas. (also for where the cats decided the dig their sweet little claws into it)

We worked as a team, LeAnn pulling flooring pieces from several boxes at a time. (you have to do that because the wood from different boxes may have different color tones and grain, you wanna mix it up ~ little secret…you also do that with roofing shingles) She then laid them out in random order, making the best use of the wood. Just a note, these boxes contained four foot and two foot long pieces. There are WAY too many short pieces in a box. We had a butt load of those left, LOL!

Rachel, meanwhile, would get down on the floor for me, since it causes me a lot of pain, and she would measure the pieces needed, note the direction of the cut, I’d go out and cut them. Then she would connect them the rest of the way down the floor, keeping them about half an inch from the wall for expansion. (we couldn’t believe it when we laid the flooring around both sides of the island and it matched up perfectly on the other side!)

The result was a seamless wood floor running from the front door, through the hall, into the hall bathroom, through the kitchen and dining areas, and down another hall to the living room.

We still have the quarter round to attach to the baseboards to hide the expansion gap, but I’m gonna do that when the weather is unbearably hot outside.

I got a little electric miter saw from Harbor Freight and I’m hoping I can cut right where I’m working and not have to run outside to use a saw. 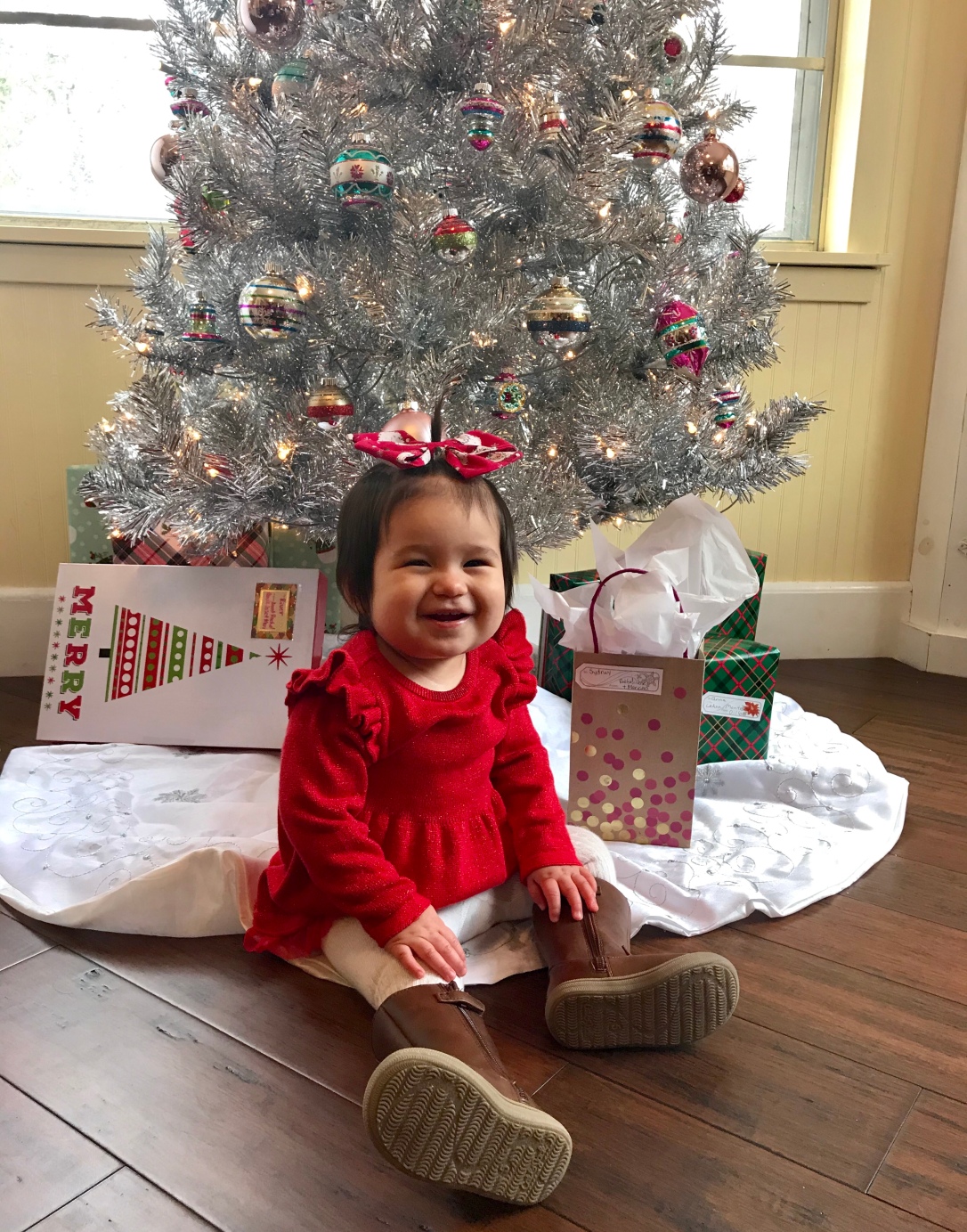 Best of all, we made it just in time for this little one’s birthday party!

Thanks for stopping by!

I’ll have a few more projects to post next time.

We weren’t sponsored in any way, shape, or form for this post.

Monte & LeAnn Thames ~ Army Vet. My career as a Business Mgr cut short by PTSD, I returned to my childhood home. Now LeAnn and I make/remake furniture View all posts by Monte Thames

1 thought on “Getting Down On All Floors”