The next morning I woke early, ate breakfast in the hotel, (read about my hotel here) then headed down the street a bit to meet up with my Wild Rover Tours coach for a day trip to the Cliffs of Moher and the city of Galway.

The coach was completely full, so I shared a seat with a young lady from Austria. (That’s another cool thing about traveling to Ireland, you not only get to meet Irish folks, but people from all over the world.) If I could give one piece of advice for the trip from Dublin to Galway, is to sit on the driver’s side of the bus. You’ll have an amazing, unobstructed, view of the coast.

After a pretty good drive, and one rest stop, we arrived at the Cliffs of Moher. There were shops built into the side of a hill and a visitor center beyond that. I immediately found a restroom, (advisable before your hike) then headed behind the visitor center and up the path to one of the most incredible sights I’ve ever seen or will ever see.

From there, I hiked for what must have been a half to three quarters of a mile on a muddy, snowy, trail that put you, in many places, only a couple feet from a several hundred foot fall into the Atlantic. I was really glad I wore my waterproof work boots with the grippy soles.

For the timid, there is also another trail on top of and across a small berm or levee. The trail winds up and down for miles, but I set my sites on an amazing outcropping and headed that way, occasionally stopping to take in the majestic setting and my first ever view of the Atlantic Ocean. (What a first view!!!)

If you notice in the photo above, I knew from this vantage point, that I had to go down to that jagged, flat area where nobody else was going.

There, I enjoyed the quiet view, away from the crowd, with just the sound of the wind and the waves crashing below my feet. 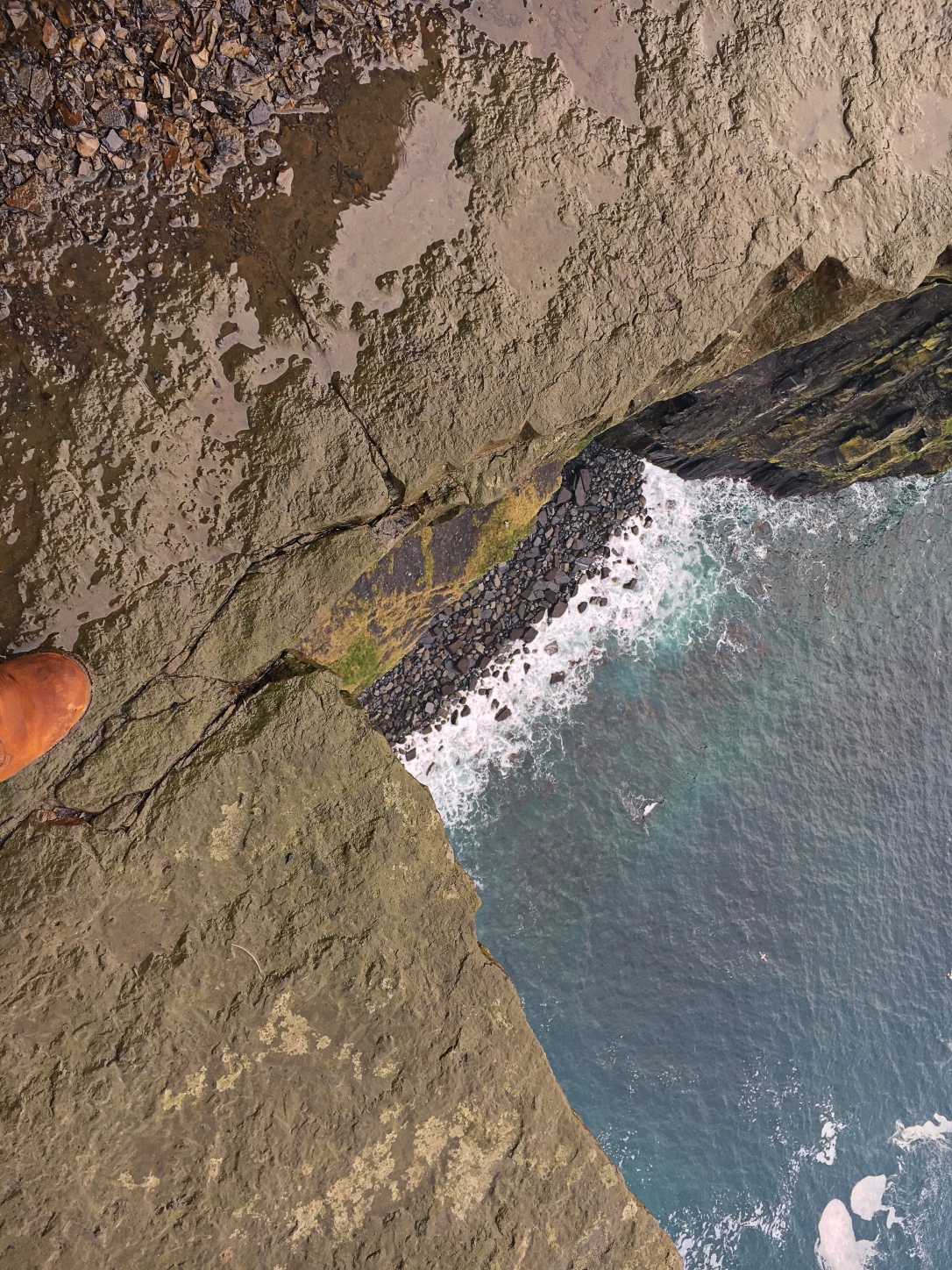 It’s worth noting that I am DEATHLY afraid of heights, but oddly, it never bothered me that day.

When I made it to the outcropping, I took in the view for a long while, not wanting to go back so soon. But, I eventually made my way back to the visitor’s center for lunch, where I had an amazing salmon steak.

I stopped in at the gift shops and found LeAnn a handwoven woolen scarf, boarded the bus, and we headed toward Galway, where on the way, we drove through the little town of Lisdoonvarna, which is famous for it’s Matchmaking Festival. So if you’re looking for a nice Irish lass or lad to settle down with, you’ll want to make your way there in September.

The drive to Galway was stunning, with picturesque views of farms, cottages, villages along the Atlantic Coast.

Galway was absolutely charming, as if plucked from a fairytale. I’d heard I could get amazing fish and chips there, so I headed down to McDonagh’s and got the best fish and chips I’d ever had. I got it to go, and snacked on it as I ambled along exploring the area where the River Corrib pours into Galway Bay. 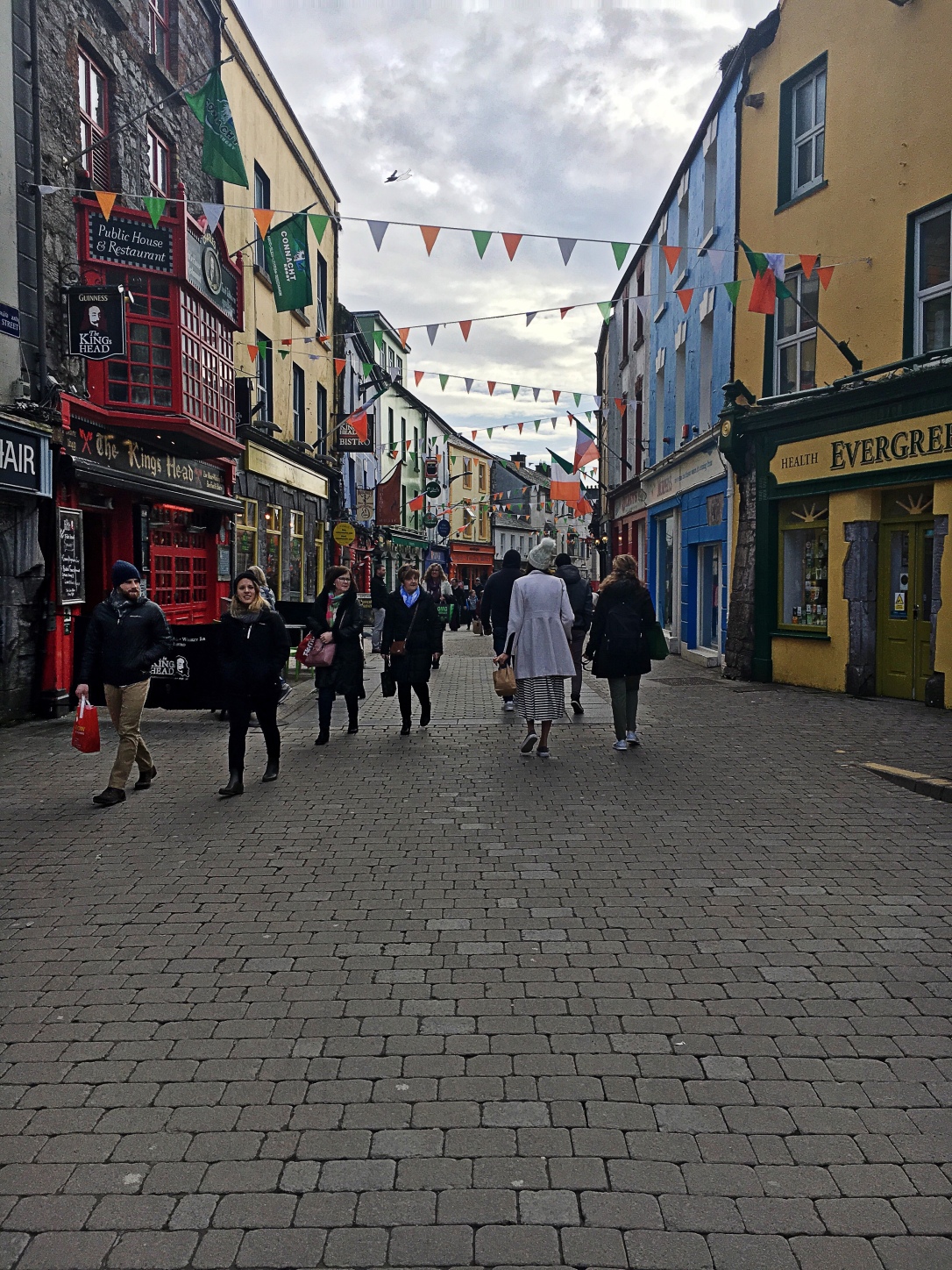 I then made my way down a LONG pier to where I touched Atlantic waters for the first time. (Again, what a first time!!!)

After a couple hours of exploring, I stopped in at the The King’s Head for a bit of Teeling’s Small Batch and then found my coach. (Trying to find the coaches ALWAYS wrecks my nerves).

I made it back to Dublin and my hotel, where I settled into the pub for dinner and the live music.

The next morning was my last day. I was sad that the trip was coming to a close, but I was exited for what I had planned that day.

The next morning I was waiting by the Molly Malone Statue at 6:15. (I wasn’t supposed to be there until 6:50, but I ALWAYS have to be early.) I was there to catch my Irish Day Tours coach to Blarney Castle, Cork, and The Rock of Cashel.

The bus wasn’t very full and our driver was really fun so the trip sailed by.

Our first stop was The Rock of Cashel. Traditionally the seat of the Kings of Munster, he donated it to the Church in 1101. At some point, it fell into disrepair and is now a preserved ruins site. It was an amazing place to visit and has a gorgeous view of the surrounding countryside, the town of Cashel, and the ruins of Hore Abbey. (Yes, it’s pronounced like you think, and yes, it is a rather unfortunate name.) 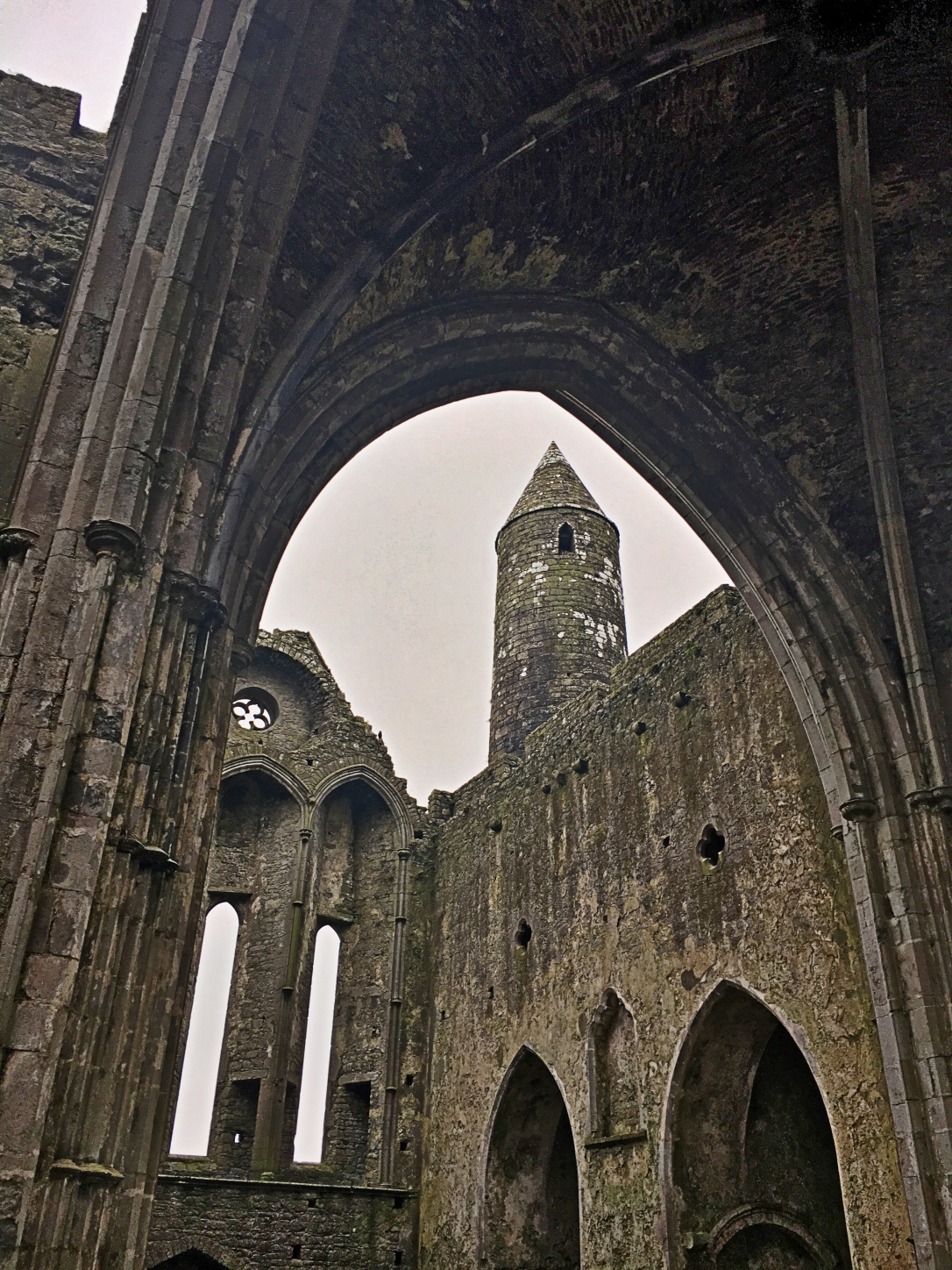 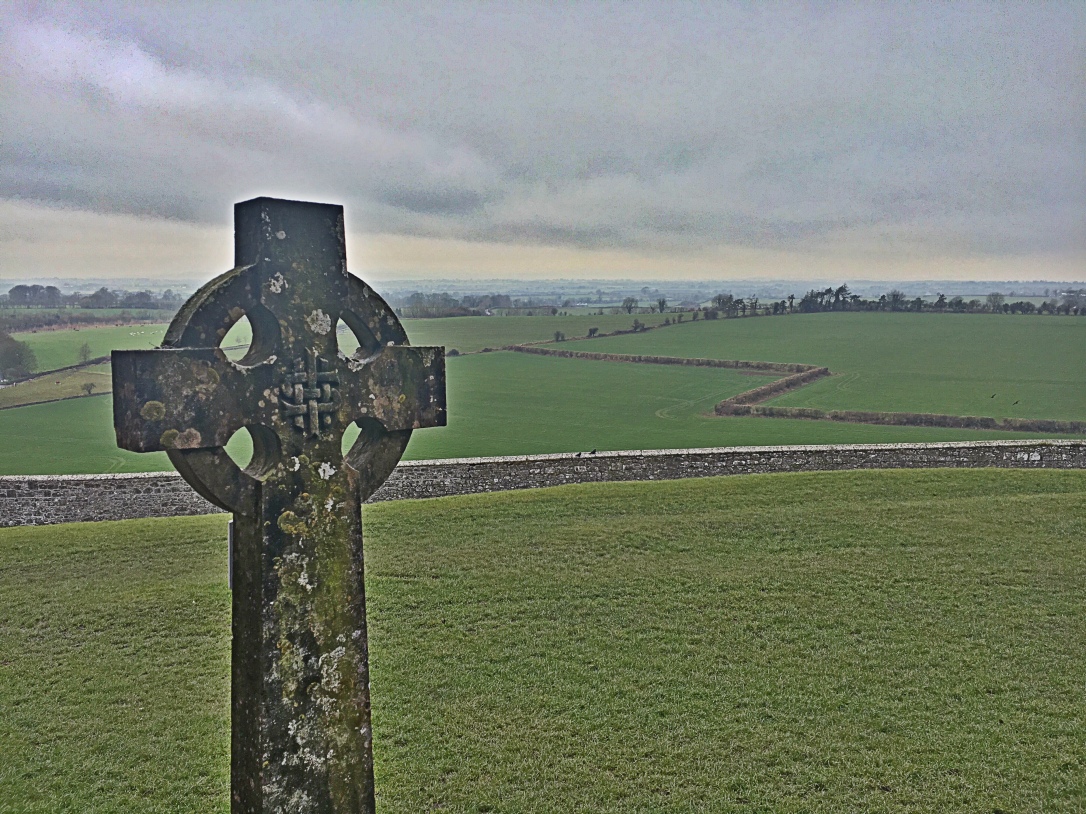 We wandered around the ruins for about 45 minutes and made our way back down the hill to our coach, where we left for Blarney Castle.

I couldn’t go to Ireland without visiting my first real castle, but which one?? There are so many. I chose Blarney firstly for the renowned Blarney Stone, (which when kissed, gives the kisser the gift of eloquent and charming speech, that is so characteristic of the Irish) and also this trip took me to Cork, one of the cities I really wanted to visit.

My first view of Blarney Castle was incredible.

It’s built on a huge rock and it’s very impressive and would seem impenetrable in it’s day.

I went straightaway to the top to kiss the Blarney Stone. I didn’t take a photo because there was a cameraman and two helpers there to assist visitors in contorting their bodies into position to greet the stone, which is in a precarious place.

To kiss the stone, you lie on your back, bend your body down backwards into a hole while holding onto vertical handrails. You kiss the stone and the guys help you back up. I knew that I would be dizzy when coming back up because my blood pressure meds do that to me, and when I came back up, I saw black for second. The young guy who helped me up and I had a good laugh about it. But I was okay and set about exploring every nook and cranny inside, outside, and even the small caves under the castle.

This medieval castle is loaded with everything you’d expect to see, from embrasures (small windows for shooting arrows) to even a damp dungeon below. 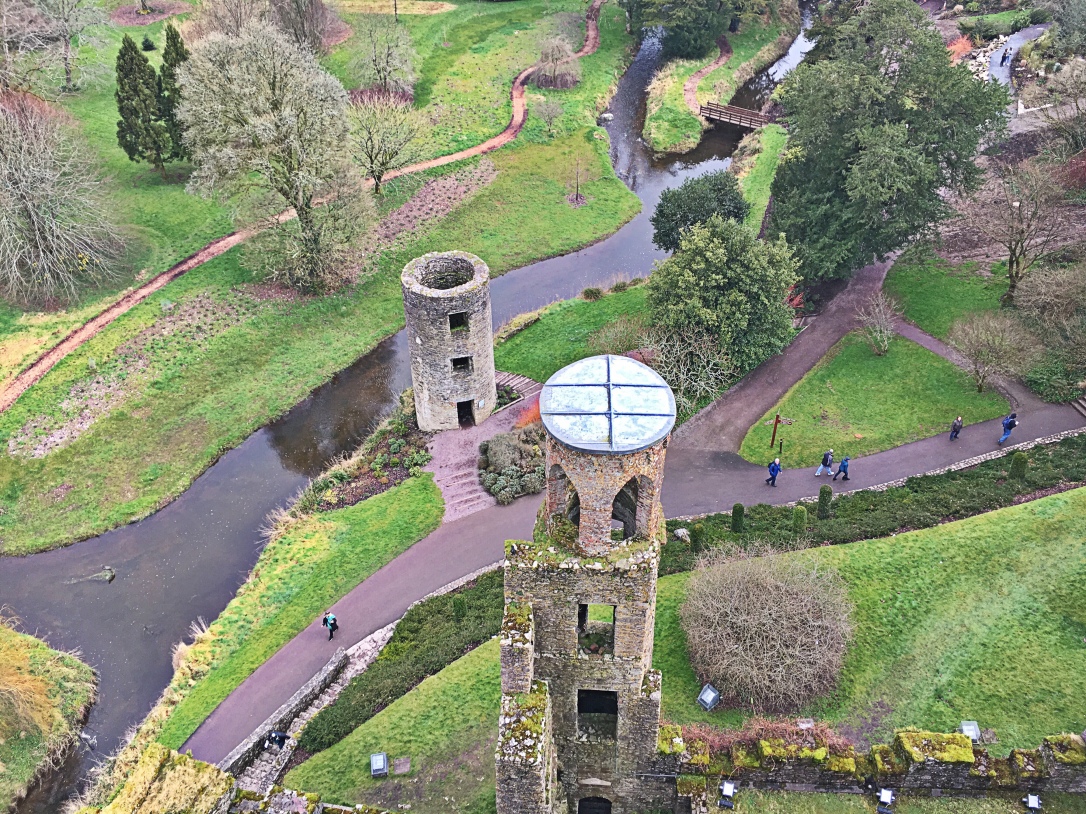 There are gardens and paths that I could’ve spent all day exploring, but we only had a couple and a half hours so I spent most of my time near the castle. When I went to collect the photo of me kissing the stone, the ladies told me that it had not captured my image. I told them that I usually have that effect on cameras. I then found the gift shop and bought myself a shillelagh and a woolen cap.

It was time to find the coach, (Did I mention that wrecks my nerves?) and I couldn’t find it. I walked, then jogged, and when it was almost time for it to leave, I rushed back to the gift shop, and very apologetically interrupted the lady behind the counter, who was talking to a customer, to ask where the coaches were parked.

Panicked, I looked for my coach among the others, trying to remember what my driver looked like. I found it in time to find that I was not nearly the last person to arrive, LOL!!!

We drove to Cork where we had about and hour and a half to explore. This proved to be very little time as I was searching for the English Market to get a sandwich recommended by our driver (I can’t remember what it’s called.) I finally found it, but they were out of that meat, so I found a sausage vendor and had a delicious sausage on a bun.

The English Market was awesome! Ireland’s most famous covered food market has been operating since 1788 and it’s loaded with shops and food vendors. I would loved to have had more time to explore. 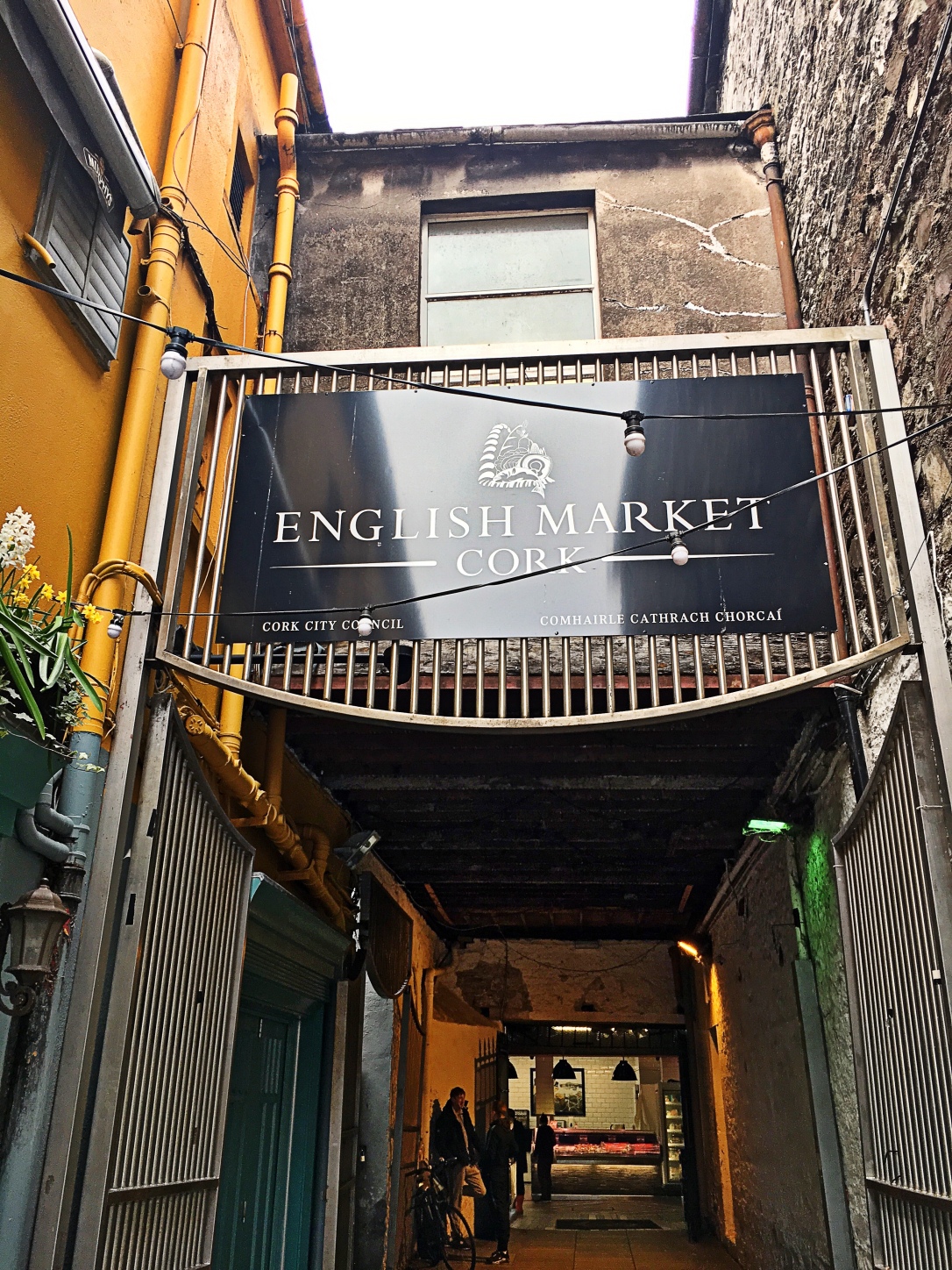 I crossed the River Lee a couple times after leaving the shopping district where I popped into Dorothy Perkins to get LeAnn yet another scarf, and picked up a coffee and a chocolate chip muffin at Dunnes.

If (when) I did it again, I’d take the express train from Dublin to Cork, hop on one of the many buses to Blarney Castle and explore more. Then spend a night or two in Cork. 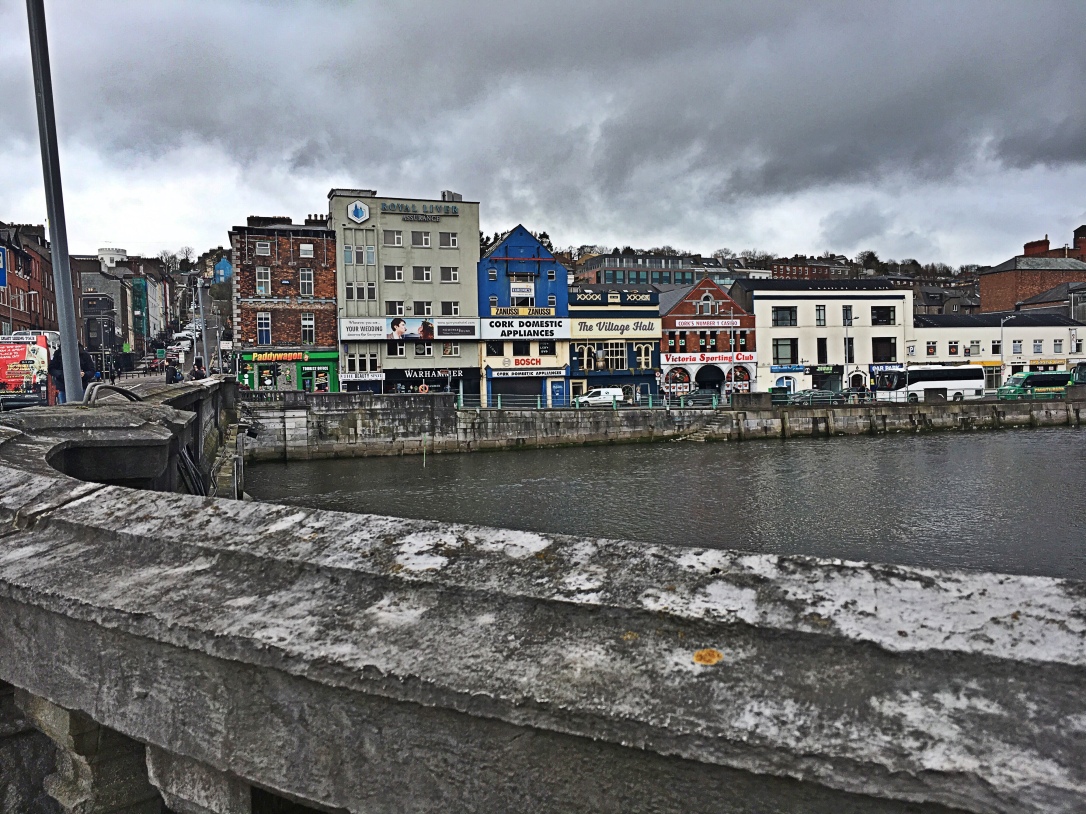 I made it back to the bus and we left for Dublin. I arrived at my hotel very tired, but I still went down to enjoy the music. Then I awoke EARLY The the morning and caught the bus to the airport. I checked in, then bought a couple of duty free items, (Whiskey and chocolate) and boarded my flight to leave Ireland.

I took some time to reflect on everything thing I’d seen and experienced as well as the wonderful people I’d met. I was leaving different. Refreshed yet exhausted. Sad to leave, but ready for my own bed and to see my family. It was the trip of a lifetime and now I had to leave. The people of Ireland and the Emerald Isle itself are indeed world treasures. The Irish are full of warmth, hospitality, and kindness!!!

We landed in Newark New Jersey and my flight was VERY delayed. I was ready to go, but it was okay. Turned out, my plane needed a repair, (yes, please repair it) but it was fixed way ahead of schedule so I was able to leave earlier than first predicted.

On the plane, I decided to look for big buildings, since I was in a big city. I saw some, but they were rather disappointing. Then, as the plane moved, I finally saw some huge buildings. I thought, “Now that’s more like it.” As I looked at them, they seemed somewhat familiar. “That one looks like the the Freedom Tower….HOLY CRAP, that’s New York City!!!”

Confession…I’ve never had a desire to visit New York City. TOO many people for me. But to see it from the air?!?! YES!!! Then I was on the lookout for the “Lady” herself.

I thought, “What an awesome end to my trip.” But it wasn’t over. Turns out, the delay at Newark had me coming in for a landing in Dallas just as the sun was setting. The plane sank in perfect sync with the setting sun, and just as we touched down, the sun sank below the horizon.

Now that was the perfect end to a perfect trip.

Thanks SO much for stopping by and having a read!!! I hope you enjoyed my ramblings.

Disclaimer: I received no payment or reimbursement for any tour, endorsement, or accommodation.

Monte & LeAnn Thames ~ Army Vet. My career as a Business Mgr cut short by PTSD, I returned to my childhood home. Now LeAnn and I make/remake furniture View all posts by Monte Thames